A post from several years back, when I had just returned from a quick trip to California. But it could have been describing just about any trip. 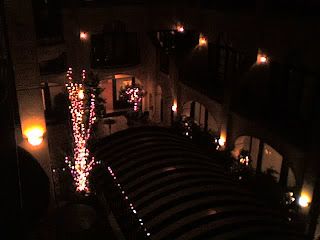 I’m home from a quick trip to San Jose to speak at a Christmas luncheon for “Mothers Together,” a ministry of Menlo Park Presbyterian Church. This was my second visit, and both times, I’ve been showered with kindness and welcomed like a friend. That’s a beautiful bunch of ladies they’ve got there. I hope to visit again.

This is a picture of the view from my balcony at the Garden Court Hotel in downtown Palo Alto Monday night. Below is a picture of that same view Tuesday morning, and one of my room just after I woke up (note the robe and slippers they provided). I could have stayed in this hotel forever. 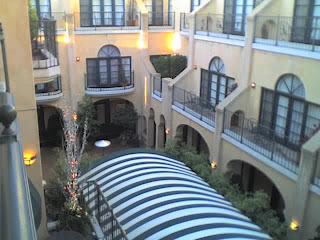 Though I was only gone a scant 30+ hours, that doesn’t mean I didn’t pack for a week. We women pack for good weather, bad weather, a change in mood, a sudden dislike for red, or black, or green (these things can’t be predicted), and for emergencies. Somehow, in all that planning, I forgot my toothbrush.

I also forgot nylons, but I realized that en route to the airport. So we made a stop at Fred Meyers before we left town and I picked up a pair. Dave tucked them in the front pocket of one of my two enormous suitcases — I saw him with my own eyes — and that was the last I saw of those nylons. Some female baggage handler (please, God, let it have been a woman) down at SeaTac’s Alaska Air terminal decided she had to have those nylons for her own. So when I arrived in San Jose and unpacked, and realized I’d been robbed, Heather and Cathy (of Menlo Park) walked me down to Long’s Drug Store after a fabulous dinner of Butternut Squash-Walnut Ravioli. Don’t even get me started. I packed books–lots of books, because the ministry team at Mothers Together set up a book-signing table for me. I packed my laptop, of course. And books to read. And my current knitting project. And all the oils, lotions, and ointments I’m currently using in my daily regiment.

I packed a notebook for all the ideas that bombard me whenever I have no paper handy. I packed earplugs, Vick’s Vapor Rub, my hair dryer (because I don’t trust hotels to plan for my forgetfulness) and my curling iron. I packed three pairs of earrings, because I couldn’t commit to just one. I packed several files for my current writing project, although I knew, even as I tucked them in my suitcase, that I’d be too tired after flying to even peek.

And so, once we lugged those two enormous suitcases back into the house Tuesday night and unzipped them both, the detestable putting-away-again began.

It was while wiping emu oil off every travel bottle and jar that had shared a ride in the plastic compartment with my container of emu oil that I began to think of heaven in a new light. I’m ready to go there; I admit that frequently. But I’ve just realized yet another appealing highlight to that future trip.

“Naked I came into this world; naked I will leave.”

I won’t have to pack a single thing.

Little Faith
Nuts
If Moody were still alive, I would hug him for this.

Meet the newest Woodwards: Doug and Carrie. Yes. A

It's time to plant! This collection of 12 medicina

12 medicinal herb seeds you need in your garden ri

We take our freedom for granted, but it's not guar

A time or two I’ve wondered.

I’m pretty sure every line would dissolve, every

Had my first bite of summer. :) On another note, i

It’s all a process, right? One down, countless t

Our owls have been watching us from the jungle gym

Muscle Magic! A great salve to have on hand — an

I had the nicest afternoon yesterday catching up w

I made a new friend yesterday. Our friendship was

Oh, why do people have to love salmon so? #fisherm