The final post in a series I wrote after meeting Hannah Overton’s church and family. If you have not already done so, please consider writing a letter to the governor of Texas asking for clemency for Hannah. Details can be found on this Facebook page. 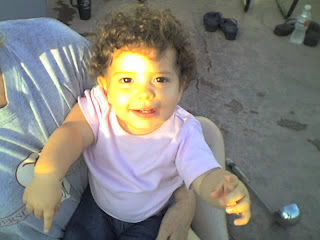 Emma wouldn’t let me hold her, at first.

She let me stare at her. She smiled for this picture. She even tolerated the touch of my fingers running through her irresistible curls. But when I reached to take her from Noreen and she found herself in strange arms, she cried.

Maybe she’d felt the weight of my gaze when they first arrived. I’d been nervous knowing Larry and the five children were coming to the resort pool to spend our last afternoon and evening with us, and kept darting anxious peeks toward the parking lot. When Noreen finally said, “Here they come,” my heart began to tap-dance. What would I say to this man? What could I say? I didn’t want to stare, but the staring began. And what a beautiful family to watch. The three oldest — Isaac, Isabelle, and Ali — ran ahead of three-year old Sebastian, and Larry, who carried Emma in her car seat. I believe my first words were, “You kids have the greatest hair!” And they do, and it’s just like their mother’s. Those thick, sun-kissed coils were in full motion, springing one way and then another. I wanted to touch every curl. But before I could reach out and embarrass us all, Larry and the younger two arrived.

“Hello, Sebastian,” I said when we were introduced. He smiled shyly and let me take his hand. I got about twelve seconds out of him before he lost interest, but that was okay. It was time to meet Larry.

“We’re praying for you back home,” I told him.

“We’ll take all those prayers,” he answered.

And then there was Emma.

It isn’t that she’s hurting worse than the rest of them. They all miss Hannah. And I’m sure it’s even harder on the others because they know exactly who they’re missing. But this baby has been robbed. She’s missed her mother bending over her crib and speaking to her in gentle motherese, and rubbing lotion on those little chubby legs, and smiling her to sleep. I wanted to hug all that hurt away. But she’d have none of it, at first.

So I woo her. For two hours, I make faces, ask questions she can’t answer (although she tries), and give her my cell phone to chew and poke and drool upon. When we leave the pool to go back up to the condo, I risk a touch of her silky cheek and let my hand linger on that head of shiny black curls. She gives me a look, but she lets me do it.

I get to know Ali and Isabelle while in that room. When I offer to take Ali into the bathroom and dry her hair, she gives me a pensive look, hesitates a loooong half a second, and then says, “Yes. You can do that.” Once that hair dryer starts up, so does her chatter. I hear “actual” this (she means “actually”) and “actual” that, and “actual” everything in between. After six or seven references, I begin to think she actually likes that word.

We leave the bathroom as friends. Isabelle decides she might be able to endure a bit of that, so she’s next. When she slips in a few “actuallys,” I smile.

We sit at the table, waiting for the clock to say “dinner,” and I watch Larry fathering his children. His voice is calm. His eyes rarely leave his children. And when he deals with them — to wipe Ali’s hair from her eyes or move back a cup Emma is in danger of overturning, his movements are gentle.

At one point, realizing that he hadn’t brought up the kids’ change of clothes, Larry says, “I’m going to run down to the car and get their clothes.” If it was any other father holding any other one-year old, I’d let the words out. I’d say, “I’ll take the baby.” But I bite back the instinct. It’s so obvious that he wants to be with her, and she wants to be with him right back.

Isaac, Isabelle and Sebastian see him rise. “Where ya going, Daddy? Can I go to the car with you?”

Larry nods. When Isabelle reaches up to take his hand, he meets her coming down. And when the family-who-can’t-get- enough-of-each-other slip out the door (Ali, talking my sister’s ear off, is oblivious to their departure), I have to go in my room for a minute and release a bit of the emotion overwhelming me.

A bit later, we leave for Snoopy’s Pier on Padre Island, a no-frills, good-eatin’, fishermen’s hangout. Just as I’ve been promised, the mahi mahi fish & chips melt right in my mouth. But what I’ll remember about Snoopy’s is that it is here, at this rough-hewn table with the lapping of the Gulf below us and the chatter of patrons and the smell of fish all around us, that Emma decides I am safe.

I reach for her again, and she leaves the haven of Noreen’s arms. Looking up at me, she grins as though we’ve been friends forever, begins chattering a blue streak of nonsense, and shows me how she can point her index finger up in the air, giggling, as she does so, at her own dexterity.

She spies my cup of water and lets me know she’s interested, so I start giving her drinks fro

We share a lemon wedge (which she loves) and then she notices the fish plaque on the wall behind us. “Fishie,” I say, pointing. I say it again a time or two. But after just those few references, she points to it on her own when I say the word. She’s brilliant. And she’s kind. After testing a limp fry, she offers the other half to me. No sense in declining, because this child is on a mission. So I accept the half-eaten fry and taste her little lemony fingers as they poke the potato in my reluctant mouth. She’s not content with my “thank you.” I have to follow up with appreciative, “that’s the best limp, half-eaten fry I’ve ever had” noises.

And then, finally, tired from all that brilliant poking, pointing and prodding, Emma rests her tiny head on my shoulder. My heart does a flip-flop. And I think, This is for you, Hannah. I’ll do this for you tonight because you can’t. But I’ll pray for the day when you take it all back for yourself.

*
This morning, I’m thinking of black curls and lemony fingers. And I’m praying as hard as I have in a long while.

Carla was passionate about this case. She and the whole church were praying for that family. Hannah should never have been prosecuted, it was wrong. The last night that we were in TX., to bring the boys to WA., Carla had us all watch 20-20 with an update about Hannah’s case. Carla never stopped praying for her and her family.